The Good Travel News We All Need at the End of 2021: Elephants Return to Conservation Area and Eco-lodge in Cambodia

Anantara, the luxury hospitality company that connects travellers to the indigenous, grounds guests in authentic luxury, with over 40 hotels and resorts located in Asia, the Middle East and Europe, has had success this year hosting other types of guests – the pachyderm kind.
﻿
The company’s charitable foundation, the Golden Triangle Asian Elephant Foundation (GTAEF) works in partnership with local communities on environmental, social and cultural conservation.
As a result of one of those partnered programs, The Cardamom Tented Camp in Cambodia recently recorded the return of a small herd of wild elephants to its conservation area, after elephants had been absent for over five years from the region.
As they are in neighboring Thailand, elephants are a beloved – even sacred – and culturally significant creature in Cambodia, even as their wild populations are threatened by development and the industrialization of processes that used to use working elephants.
In a piece of rare, happy news coming from travel during the pandemic, forest rangers in the conservation area in Cambodia discovered and photographed elephant footprints and droppings. The evidence of elephant inhabitants occurred inside the nearly 45,000-acre forest concession, which the camp protects with help from The Golden Triangle Asian Elephant Foundation (GTAEF). 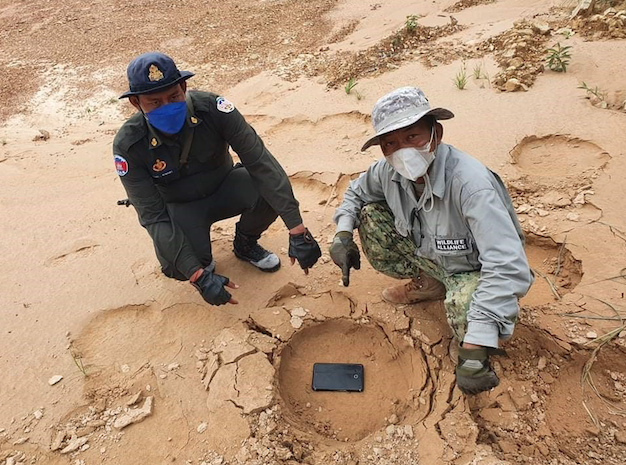 Throughout the Covid-19 pandemic Anantara guests, via the GTAEF, continued to support the ongoing maintenance of the camp and its team of rangers despite borders being closed to tourism. Anantara Angkor Resort in Siem Reap also donated supplies directly to the eco lodge throughout the past year.
GTAEF wildlife experts estimate that a herd of nine elephants, consisting of four adult females, their calves, and one young adult elephant, make up the new herd in the conservation area. Members of the herd have also been captured on motion-sensored cameras nearby. The organization hopes the elephants will make themselves at home in the safety and security of the conservation area. 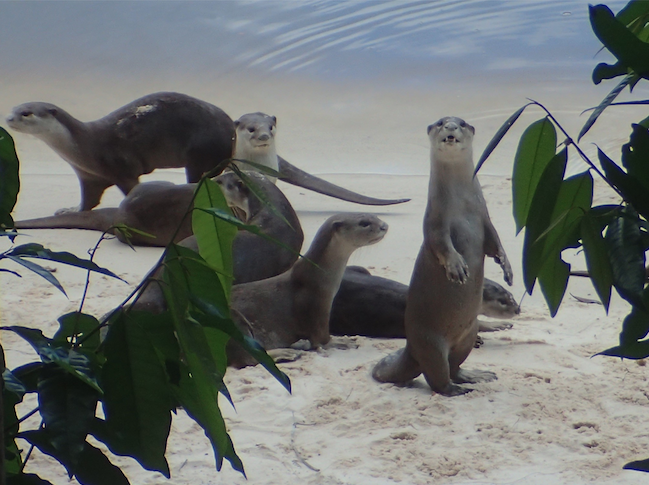 There’s more good news besides. The Lodge manager, who is also a wildlife photographer and conservationist, reports the return of a group of 15-18 otters to the Preak Tachan river beside the camp. This species of otter is native to Cambodia and is one of three species that are globally threatened and at risk of extinction due to human activities. So their appearance is hoped will allow Cambodia to play a role in the global conservation of otters. 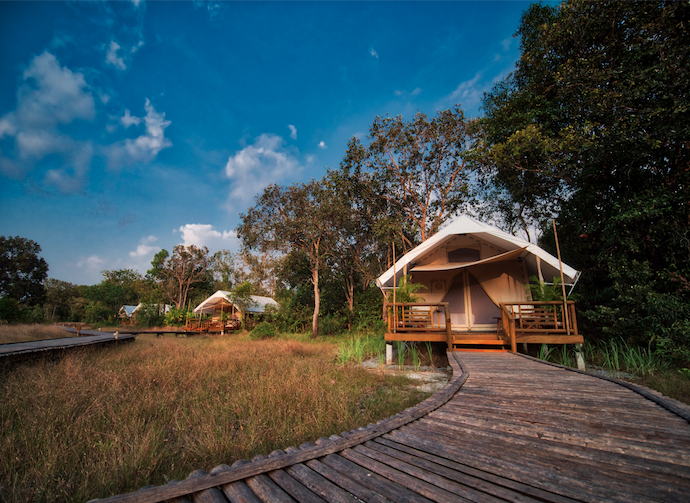 The Cardamom Tented Camp, is located in Southern Cambodia’s Cardamom Mountain range. It’s a non-profit eco lodge resting within 18,000 hectares of pristine land, and opened in late 2017. Proceeds from the camp are used to fund rangers that patrol the concession, protecting against deforestation and illegal poaching. Since funding began, the protected haven and wildlife in it have thrived. That’s as development has continued in the region.
Guests often see otters, macaque monkeys, kingfishers and hornbills from their boat when they travel to the camp, which is only accessible by river. The camp offers multiple hiking trails for adventurous guests to join the rangers on guided wildlife and bird spotting hikes through up to 5 miles of forest before returning via kayak with rest stops at the main ranger station in each direction. 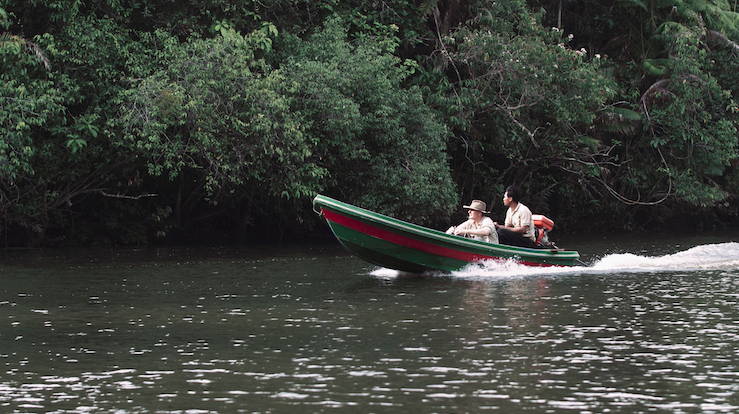 In October, Cardamom Tented Camp was included in the Green Destinations’ Top 100 Destination Sustainability Stories in the world. In 2019 the camp won the PATA Gold Award for Ecotourism and was a top three finalist in the World Travel & Tourism Council’s Tourism for Tomorrow Awards. In the same year, it was listed in National Geographic UK’s invitation-only listing of top 36 eco-hotels around the world that are leading by example.
At the end of 2021, Cardamom Tented Camp is once again open and operating with a unique business model. Part of the income from the lodge’s operation goes towards the funding of 12 forest rangers who protect the area from loggers, poachers and river sandbank dredgers.
Fully vaccinated travellers can now enter Cambodia and it has nearly 90% of its population fully vaccinated, one of the highest rates in Asia. The ideal time to visit this idyllic corner of the world is between December to April as the southwest Cambodia region near the Thai border enjoys blue skies and rain free days.
Talk to your travel advisor about planning a visit that supports the wilderness and wildlife of South-East Asia.

Kenya may already be on your travel bucket list for a once-in-a-lifetime epic wildlife safari through its sweep... learn more

Travel During Year of the Tiger: Where to See Tigers in the Wild

Welcome to the Year of the Tiger! Once every dozen years, the Lunar New Year celebrates the largest of all cats,... learn more

Travel Company Leaders Dish on their Most Romantic Trips

Step away from the chocolates. Move over, diamonds. The most romantic gift is time together with your best-beloved, a... learn more

The Most "Amazing Journeys" in 2022, According to National Geographic's Experts